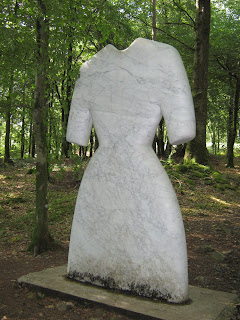 I fall off a lot. Very little natural balance and my current lack of confidence returning to cycling after so long contribute to this. Falling off happens at low speed, and I'm usually laughing before I hit the ground at the idiocy of the situation, and my incredible lack of grace.
Crashing is a bit different; in general it happens at speed and hurts to some degree. Today my crash was caused by the same thing - lack of confidence. Falling off usually entails giggles and a handy - and hopefully non-prickly - bush in which to land. Crashing involves sliding along the trail on your face.
Here's what I learned today:
The mini-slab at Mabie; I had ridden it perfectly fine three times already. "Just one more before we go."
Cocky or complacent? Not sure, but with my weight too far forward the bike kicked me in the ass as I went over the front. My face hit the trail, and the bike booted me in the ribs for good measure.
I thought I was a little bit scraped, until I got in the shower once home and found I was one big scrape with intermittent patches of skin. And my ribs still hurt.
Can't wait until next time!
In other news, bagged my first 'Stane' today - see the picture. The Ghost Stane is a two-and-a-quarter ton white marble sculpture engraved with a lace pattern. One down, six to go!
Posted by Stace at 11:24